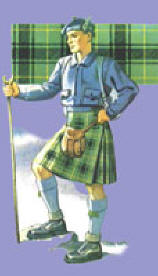 When you put on your Clan’s colors you are putting on your family’s history. The tartan and subsequent Highland dress
should always be worn with dignity and with an understanding and observation of the tradition they represent. It is a uniform
and an icon. People normally take immense care in correctly wearing proper Highland Dress, and that is what
it deserves, because men have died in war wearing it and men and women suffered death, transportation, privation,
and hardship because the tartan was their native wear and they refused to obey the 18th century ban on tartan
promulgated by the Hanoverian Government after the 1745 Jacobite Rising failed.
It is important to stress that Highland dress is referred to as “Scottish attire” both in Scotland, and by those of Scots descent or affiliation, around the world, and rightfully so. It is not a “costume,” but attire, and it’s important to remember this. As the late J.C. Thompson said in his wonderful book “So, You’re Going To Wear the Kilt?”: “…The kilt is perfectly normal dress for any man of Scottish ancestry or connections, and anyone who feels differently is simply displaying their ignorance.”

Highland Dress is not just for special occasions. It can be worn at anytime. Men who wear the kilt regularly find that it is a sensible, comfortable garment which can be worn with ordinary shirts or sweaters. It does not necessarily need all of the accessories listed below. The kilt is the most important item of Highland dress. It usually reaches just to the top of, or slightly above, the knee. There is often a kilt pin attached to the front flap for decoration. What you do or don’t wear under the kilt is your own business. A good Scotsman will not tell when asked. (When asked what is worn under the kilt, especially by a lady, a typical reply is “nothing worn, m’am, everything is in perfect working order,” usually accompanied by a wink).

Any ordinary shirt or sweater may be worn with the kilt. Some men, when attending a very formal occasion in the evening, like to wear a lace jabot around the neckline, and sometimes frilled cuffs, and for very formal affairs a fly plaid which is pinned to the shoulder with a brooch and drapes behind. Others prefer a plain shirt and tie, or an evening dress shirt and bow tie. A belt is usually worn at the waist, over the kilt. The buckle is often brass or silver, and sometimes has detailed carving on it, or is set with a cairngorm, which is a semi-precious amber-colored stone found in the mountains of Scotland.

Special kilt jackets can be bought, which are jackets and blazers with a different cut that those worn with trousers, and are usually shorter to better show off the kilt. One for everyday wear could perhaps be a tweed jacket; another for formal evening wear is often black, although other colors are sometimes worn. 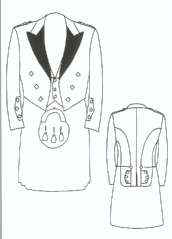 • Prince Charlie – This is a black, formal, jacket with tails behind, a short front, straight sleeves with no cuff, and typically silver or chrome buttons. It is not meant to be buttoned in front, and is usually worn with a matching black waist coat (vest), though it is seen often today without the vest and with a belt, instead. It is almost always worn with a standard tuxedo shirt and black or tartan bowtie. (A fly plaid is not typically worn with the Prince Charlie though it is seen more often lately). 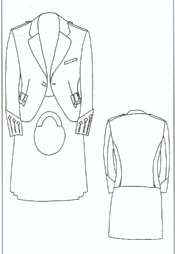 Argyll – This is usually a black, single breasted jacket with “gauntlet cuffs” (cuffs which are rolled back to about mid-forearm) and silver buttons. It is considered “semi-formal” wear and can be worn for daywear or semi-formal evening occasions. Most men start with an Argyll as it gives them the most options. Variations of the Argyll exist, such as tweed versions in various colors, and even some variants with sleeves more like the Prince Charlie. The Argyll is typically worn with a standard white dress shirt and tie. 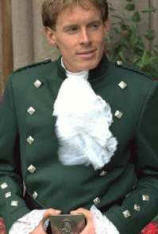 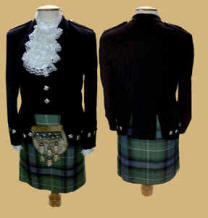 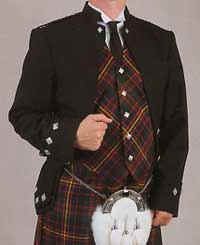 • Sheriffmuir – The Sheriffmuir jacket is another very formal option to the Prince Charlie or Montrose. It has “Inverness Flaps” extending off the sides, from the waist. The jacket is typically worn with a shirt and vest and lace jabot and does not typically button in the front. A fly plaid is also generally worn with the Sheriffmuir for a complete “full dress” look.

Special jackets are not always necessary. A simple pullover would be quite acceptable. In cold weather, men who wear highland dress sometimes wear a large tweed cape known as an Inverness cape. Waterproof capes can also be worn when it is wet.

Some men like to wear a Balmoral bonnet with Highland Dress. Another type of bonnet, known as a Glengarry, is often worn by pipers.

The kilt looks best when worn with knee-length hose (socks). These are usually held up with an elastic garter. Small strips of ribbon, known as garter flashers, hang down below turned-down tops of the socks. These can be in one color, or tartan. The shoes worn with the kilt can be anything from hiking boots with high socks in outdoor, casual occasions, to expensive “ghillie brogues”. For most occasions standard, black dress shoes or brown shoes (in daywear situations) can be worn. For formal affairs one typically sees the black patent leather “Mary Jane” shoes with a large buckle, or black patent “ghillie brogues” which lace up around the ankles and have open tops. One sees standard, black leather ghillie brogues worn with most variants of Highland dress, in everything from daywear, with a Jacobite shirt and Jacobite waist-coat or jacket, to the most full-dress Montrose or Sheriffmuir outfit. Ghillie brogues come in many varities and colors and you can usually find a pair that is right for any given level of dress.

The sgian dubh (skee-an doo), or black knife, is often worn by men in Highland dress. The knife is tucked into the top of the right kilt hose, with just the top of the shaft showing. Although the original purpose of the sgian dubh was for skinning animals, it is nowadays largely ceremonial, although it does make a useful pen-knife. For formal, full dress affairs one typically will also see a jeweled “dirk” hanging from the belt. The dirk is a long knife, or a short sword, depending on how one looks at it. The dirk was the weapon of choice, and usually the first deployed, by the Highlanders of old. Today, the dirk is ceremonial and typically is only seen for full dress affairs and only with a Montrose or Sherrifmuir jacket. (It is recommended by many, that while the Prince Charlie coat is formal dress, that it be kept simple, and it is not recommended that one wear a dirk or a fly plaid with it).

The sporran, or kilt purse, is made of leather or hide, sometimes with a design on the flap. The sporran is hung high in front of the kilt on a plain strap attached to the waist of the kilt. The general rule is that the top of the sporran should hang about one hands-width breadth below the navel. Sporrans come in three styles, plain leather variants for daywear and informal occasions, “semi-dress” variants in some combination of leather, fur, and sometimes chrome or silver to be worn for semi-formal daywear or evening occasions, and dress sporrans for formal and full dress affairs. The dress sporran is typically very expensive, and made from either horse hair, or various furs: mink, muskrat, rabbit, or seal-skin (in Scotland. Be warned that seal-skin is illegal in the U.S.! You can face a stiff fine if you should buy one and get caught with it here in the States. Not all Scottish importers are up on this, and you will find some Internet sites that will sell you a seal-skin sporran on-line. Be warned of the risks! This can also serve as a warning for those who travel to Scotland and buy one in ignorance before trying to bring it back through customs. There are many other options available for a dress sporran, in the States.) The dress sporran typically has an elaborate chrome or silver top with engraving work, and fur tassles with chains, etc.

The cap badge is worn on the balmoral or glengarry bonnet. It is now made of silver or white metal and shows the clan crest, which must be surrounded by a strap and buckle unless worn by the clan chief. The badge is normally worn on the left side of the cap, on a cockade of ribbon. Alternately, if you are familiar with your traditional clan badge, this can be worn in the bonnet, tucked into the cockade, or behind the metal badge (for Clan Arthur, this is a sprig of Fir Club Moss or Wild Myrtle). A Clan Chief wears three eagle feathers in his bonnet, and his sons or chieftains will wear two eagle feathers. A Clansman who bears his own personal coat of arms may wear one eagle feather. Any other clansman should never wear any feathers, especially eagle feathers (which are illegal in the U.S., anyway) in their bonnet! 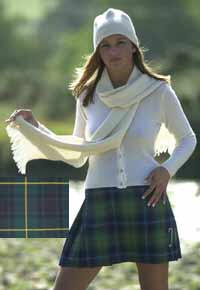 Many women wear kilted tartan skirts, frequently mid-calf length, with or without a kilt pin. Sporrans and kilts are
never worn by women unless required to do so as part of the uniform of a mixed pipe band. A kilted tartan skirt is worn
with the usual range of women’s blouses, pullovers, and jackets; whatever is tasteful.

Nowadays, white gowns with tartan sashes are seen all over the world, especially at Scottish Highland Balls and Dances.

Sashes are worn across the upper half of the dress, from the right shoulder diagonally across to the left hip where the two
ends are knotted together. A brooch pins the sash to the shoulder. The wife of the clan chief pins the sash to her
left shoulder in opposition to the position of her clanswomen’s sashes.

A style of dress known as Aboyne Dress is made up of a full-length tartan skirt, a white blouse , and a velvet waistcoat
with a pinned-on sash. Pumps are also worn.