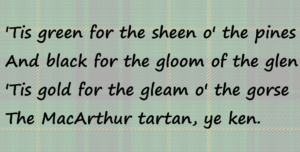 Tartan has without doubt become one of the most important symbols of Scotland and Scottish Heritage and with the Scots National identity probably greater than at any time in recent centuries, the potency of Tartan as a symbol cannot be understated. However, it has also created a great deal of romantic fabrication, controversy and speculation into its origins, name, history and usage as a Clan or Family form of identification.

What is a Tartan?

Tartan is a woven material, generally of wool, having stripes of different colours and varying in breadth. The arrangement of colours is alike in warp and weft – that is, in length and width – and when woven, has the appearance of being a number of squares intersected by stripes which cross each other; this is called a ‘sett’.

Repro. Falkirk Tartan
By changing the colours; varying the width; depth; number of stripes, differencing is evolved. Tartan patterns are called “setts”; the sett being the complete pattern and a length of tartan is made by repeating the pattern or sett over and over again.

Origins of Tartan
The Celts for many thousands of years are known to have woven chequered or striped cloth and a few of these ancient samples have been found across Europe and Scandinavia. It is believed that the introduction of this form of weaving came to the West of Northern Britain with the Iron age Celtic Scoti (Scots) from Ireland in the 5 – 6th c. BC.
Early Romans talked of the Celtic tribes wearing bright striped clothing – there was no word at that time for chequered. One of the earliest examples of tartan found in Scotland dates back to the 3rd century AD, where a small sample of woollen check known as the Falkirk tartan (now in the National Museum of Scotland) was found used as a stopper in an earthenware pot to protect a treasure trove of silver coins buried close to the Antonine Wall near Falkirk. It is a simple two coloured check or tartan which, was identified as the undyed brown and white of the native Soay Sheep. Colours were determined by local plants that could be used for dyes.

Tartan The Name
The word Tartan we use today has also caused speculation and confusion as one camp says it comes from the Irish word – tarsna – crosswise and/or the Scottish Gaelic tarsuinn – across. The Gaelic word for Tartan has always been – breachdan – the most accepted probability for the name comes from the French tiretaine which was a wool/linen mixture. In the 1600s it referred to a kind of cloth rather than the pattern in which the cloth was woven. 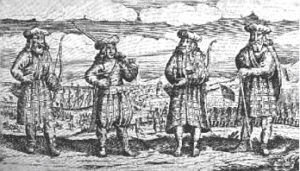 The next important milestone in the history of tartan was the 1745 rebellion ending with the Battle of Culloden in 1746 and the following genocide in the highlands. The romantic Young Pretender, Charles Edward Stuart – Bonnie Prince Charlie – ranged his inferior Jacobite forces of Highlanders against the Duke of Cumberland’s Government forces. The Jacobite army was organised into Clan regiments and as historian Jamie Scarlett explains “here we have the first hint of the use of tartan as a clan uniform.” To understand how this battle proved to be the catalyst for the great Clan Tartan myth, we have to look at the lifestyle and the terrain in which many of Scotland’s major families or clans lived at that time.
Each area or community grouping would doubtless have, as one of its artisans, a weaver. He – they were invariably men – would no doubt produce the same tartan for those around him and that tartan would initially become what we now call a District Tartan – one worn by individuals living in close geographical proximity such as glen or strath. By its very nature, that community would be one huge extended family that soon became identified by its tartan which it wore, not to differentiate it from its neighbours in the next glen – but because that is what its community weaver produced! It was one short step from there to connect that tartan to the name of the wearers. 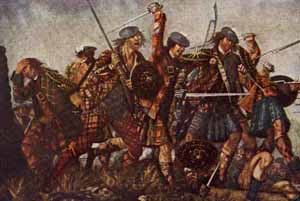 All weavers depended very much on local plants for their dyes so the locality of the weaver might well have some bearing on the colours of the tartan that he produced. If he lived on the west coast of Scotland, Gipsywort would give him lettuce green, seaweeds would give him flesh colour and seashore whelks might provide purple. If he lived inland, then he would undoubtedly look to the moors for his colours:  heather treated in different ways would give him yellow, deep green and brownish orange; blaeberries (the favourite food of the grouse) would provide purples, browns and blues; over 20 different lichens would give him a wide range of subtle shades. If he was affluent or dyeing and weaving for a customer of some substance, then he would seek more exotic imported colours of madder, cochineal, woad and indigo.

“The Battle of Culloden” by David Morier circa 1745

If the concept of clan tartans was born at Culloden it wasn’t universally known – in that battle there was frequently no way of differentiating friend from foe by the tartan he wore. The only reliable method was to see with what colour ribbon – sprig – a bit of plant – each combatant had adorned his bonnet which, would differ to show the affiliation to ones Clan. This represented in Scottish Heraldry today as a ‘Plant Badge’ that would be worn by a follower to show loyalty to ones Chief. There is a contrary view that this was caused, not by the lack of clan tartans, but by the Highlander’s propensity for discarding his cumbersome philamhor (belted plaid) before charging into the fray.
After Culloden and the following genocide that occurred throughout the Highlands, the Government was determined to destroy the Clan System and raised an Act of Parliament known as the “The Disarming Act” one of these laws was to make the wearing of tartan a penal offence for the next 36 years until 1782. This proscription however applied only to common Highland men – not the upper echelons of Highland society, not to Lowland Scots and not to women. But most importantly, it did not apply to the Highland regiments that were being formed in the Government army.

Clan Identification and Tartan
William Wilson and Sons est. 1760 of Bannockburn, near Stirling was relatively unaffected by the ban on tartan (1746 – 1782) and continued to mass produce  Setts of tartan for the Military and the Upper classes. The Wilson’s “Key Pattern Book” of 1819 documents weaving instructions for more than 200 Tartans – many of them tentatively named – produced at their Bannockburn dye works and weaving sheds.

There is no evidence that Wilson’s Tartans had anything whatsoever to do with any ancient regional or pre-1746 patterns. The Tartans worn at the Battles of Sheriffmuir or Culloden have almost all been lost forever. In 1816 an attempt was made to match Clan to ‘true’ Tartan. Tartans were gathered but these had more to do with regimental uniforms and Wilson’s successful marketing than any older patterns. But the idea that Tartan and Clan paired had become firmly established.
When the laws were repealed in 1782 there was a resurgence of Scottish nationalism and efforts to restore the spirit and culture of the Highlands
Wilson & Sons. No 219 – 1819

after this lengthy period of repression were encouraged by the newly formed Highland Societies in London (1778) and Edinburgh (1780).
Thanks to the personal planning of Sir Water Scott, the 1822 visit of King George IV to Edinburgh was to see Highland Chiefs being persuaded to attend the levee and other functions, all attired in their Clan tartans (some did not go). Almost overnight tartan became popular and families, who probably had never before worn tartan, (and hated the Highlanders) became the proud possessors of family Tartans. This along with Sir Walter’s romanticism of Tartan in his novels this was to aid the Clan and the Tartan to become synonymous.
Another great boost to tartan came from Queen Victoria and her Consort, Prince Albert. They fell in love with Balmoral – the Royal residence on Deeside in Scotland – and with tartan and all things Highland. Prince Albert designed the now world famous Balmoral tartan and they bedecked room after room with it, further consolidating the Victorians’ romanticised view of the ‘noble’ Highlander.

GENTLEMEN – THE TARTAN
Here’s to it!
The fighting sheen of it,
The yellow, the green of it,
The white, the blue of it,
The swing, the hue of it,
The dark, the red of it,
Every thread of it.
The fair have sighed for it,
The brave have died for it,
Foemen sought for it,
Heroes fought for it.
Honour the name of it,
Drink to the fame of it –
THE TARTAN.
(Murdoch Maclean)

Over the last fifty years or so tartan has developed into a multi-million pound industry dominated by a few large mills. Today tartan holds a unique place in the annuals of textile history and has come to symbolise, along with the kilt and bagpipes, the cultural identity of the whole Scottish nation.
One thing Murdoch Maclean forgot in his poem was –‘Be Proud of It’
© John A. Duncan of Sketraw, KCN, FSA Scot. 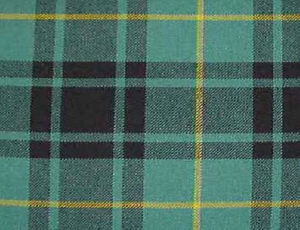 700 MacArthur of Milton Hunting  (personal property of the Clan Chief)

Coat of Arms
Coat of Arms usage is controlled by Scottish law and
is under jurisdiction of the Office of the Lord Lyon of
Scotland. Arthur Coat of Arms as shown is not
for personal use.

Matriculated : The Court of the Lord Lyon. By interlocutor, 28th August 2002.

In August 2002, the Lord Lyon approved the petition of James MacArthur of Milton, making him the first Chief of Clan Arthur for over 220 years. James MacArthur served as Commander of the Clan for ten years. The previous Clan Chief, Charles MacArthur of Tirivadich died with no apparent heir.

The new Chief and his predecessor share common ancestors from the late fifteenth century in the persons of John MacArthur of Tirivadich and his son Charles. James MacArthur was the heir male of the third son of Charles MacArthur, one John MacArthur of Drissaig until the more senior lines were proved to have died out.
Ten years ago the armigerous members of the clan held a derbfine which selected James MacArthur as the candidate to be presented to the Lord Lyon to become Commander of the Clan.

James’ arms were matriculated then as Azure a cross moline Argent between three ancient crowns Or (L.R. volume 70, folio 110). With the removal of the silver cross, the chief’s coat now reverts to the earliest form of arms of the chief of Clan Arthur, a shield apparently identical to the description given in ancient manuscripts for the legendary King Arthur’s blazon!